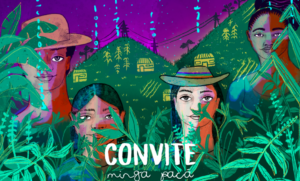 ‘Convite is a series of sound postcards directed to land defenders, environmental defenders, social leaders of indigenous, black and rural communities that seek to, with the use of sound language, contribute information, tools and resources related to digital security and self care in their digital, physical, psychosocial spaces.  It’s above all a sum of wills and tools between the human rights community in the digital age and the indigenous, black and rural communities of southwestern Colombia.

One of its goals is that more rural people in Latin America participate in discussions such as privacy, self-care and digital security with a feminist perspective. That is why we want to think of Convite as a first version that can be expanded to different territories in Latin America.

In each of these sound postcards, storytelling is used in order to address a concern of these communities, regarding their relationship with digital spaces; mixing testimonies, décimas and the Kiwes Thegnas voices who whispered to the radio in Spanish and their native language as well as those of the human rights community in digital spaces in different Latin American countries and Spain. The sound design of the postcards is inspired by the landscapes heard in the territories inhabited by the communities that are the focus of the project, their own music and the décimas -a musical expression- that surfaced during the accompaniment.

The titles and some key aspects of the postcards are inspired by different symbols and tools, typical of the worldviews and culture of the indigenous, afro -cimarrones- and peasant guards, looking for metaphors between the defense of their physical territory and digital territories and the way in which they have narrated their struggles through their music, weavings, hairstyles, among others.’